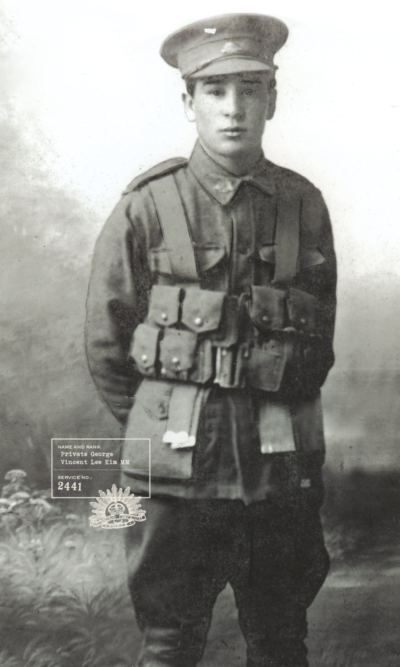 A son of Hong Kong born immigrant William Lee Kim (李錦興) and his wife Ellen Plowright, George Vincent Lee Kim was born at Grassy Flat, where his father had a market garden, on 12 January 1897. A year later he was baptized into the Church of England by Rev. R. C. M. Kelly at the mission church at the Ironbark Chinese village.
As a teenager Lee Kim joined the army cadets, and by 1914 he was a corporal in the 67th Infantry Regiment in Australia’s part-time pre-war military. George enlisted for active service, with the legal consent of his father, at the age of 19 in July 1916, two months later embarking for England on the troop ship HMAT Shropshire as a private in the 60th Battalion AIF, the unit with which he was to remain throughout the course of the war. Lee Kim arrived in France early in the new year of 1917, and by year’s end had been promoted to corporal after almost 12 months of service in the field. A small glimpse of the horrors that he must have witnessed during the conflict was conveyed in a letter to his mother which was quoted in the Bendigo Advertiser: ‘A bursting shell from the German guns killed Private J. Forrest and another Australian, while Lieutenant Power, formerly of the Bendigo camp, was seriously wounded by fragments of the shell. Private Forrest was killed instantly, and was buried in a military cemetery in France by his old pals. He was one of the best, and was very popular with his comrades.’ The Roll of Honour circular for John Forrest states that he was killed in action on 17 March 1917 at Bullecourt, France.
In the final months of the war his bravery in the field resulted in Lee Kim being awarded the Military Medal. His citation reads: ‘For conspicuous gallantry and devotion to duty during operation on 30th August – 5th September 1918. On 2nd September 1918 near PERONNE when his platoon officer was rendered a casualty, this N.C.O. took charge of the platoon and although badly shaken he set a splendid example by his initiative and bearing in leading the platoon forward to its new position.’
When George Lee Kim settled back into civilian life he resumed work at his father’s Grassy Flat market garden, the ownership of which he took over in the mid-1920s. He married Gerte Powell in 1920. Lee Kim was also involved with the Chinese procession in the Bendigo Easter Fair, escorting the dragon Loong over many decades.