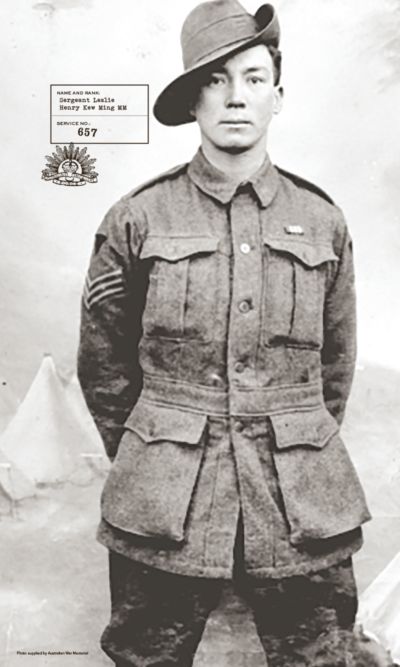 Leslie Kew Ming was born near St Arnaud in 1897. Leslie’s parents were Kew Ming Lock (sometimes called Ah Loch Kew Ming and Toy Lock – his Chinese language gravestone calls him 蔡廣隆 Toi Gwong Lung) and Louisa Cum Moon.
Kew Ming was a gardener and publican who had been born in the county of Toishan 台山 in China’s Guangdong province and Louisa, who was born in Percydale near Avoca, had come from the Wimmera town of Minyip, and was the daughter of a Chinese born father and a mother of Scottish background. The Kew Mings lived in the “Chinese Camp” at North St Arnaud (also known as New Bendigo), where Louisa was the licensee of the All Nations Hotel. After completing his schooling young Leslie spent time in Minyip with his maternal grandfather Cum Moon
金滿, learning the profession of boot making from the older man. Even in his teenage years Les seems to have already been community minded, being a member of the Minyip branch of the Australian Natives Association (the president and members of which regretted his loss and wished him safe return upon his enlistment in May 1916 ) and of the Minyip Fire Brigade. Although of majority Chinese heritage Kew Ming was able to enlist and began his active service in the 2nd ANZAC Cyclists Battalion, before being transferred the 6th Training Battalion, and then to the 23rd Battalion AIF upon his arrival in France in April 1917. On 9th October that year Cpl Kew Ming led his men in digging a communications trench while wounded and under heavy shell fire. His example and bravery led to Les being awarded the Military Medal. By the war’s end Kew Ming had been promoted to Sergeant. After the war Kew Ming found some fame as a champion athlete and footballer, being one of the first Asian Australians to play in the VFL. He also played in the Bendigo league for a time and settled in Echuca where his father had established himself as a market gardener. Leslie Kew Ming passed away in 1960 aged 63.