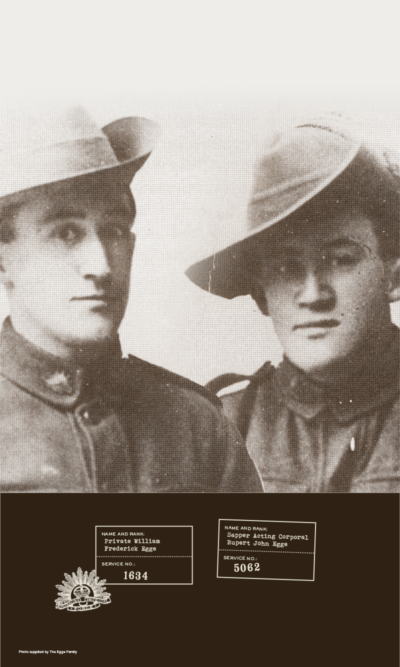 Rupert and William Egge were the grandsons of John Egge (original Chinese name unknown), a former seaman from Shanghai who had come to Australia as a young man in the 1850s and later made his living as a riverboat captain along the Murray and Darling Rivers. Rupert and William were born and grew up in the river town of Mildura – their mother died while they were still children and with their father apparently unable to properly care for them they and their sister Maisie were separated and placed with different foster families in the district. By the time that elder brother Rupert enlisted during the early months of the Gallipoli campaign in July 1915 he was a 23 year old cycle and motor mechanic. His complexion was described as dark, his eyes brown, and hair black. William enlisted in April the following year – he was 18 years old and described as a horticulturist. Likewise he was also dark and black-haired but with blue eyes. He had previously been rejected on account of his teeth, but not it seems on account of his racial background. Both brothers served in France, with some time spent in England. Rupert was in Egypt from March to June 1916 when he was shipped to France. In August that year he suffered a gunshot wound to side and back and spent most of the rest of the war at hospitals in England or on non-combat duty as an NCO. Rupert returned to Australia before war’s end in 1918, by which time he was serving as a Temporary Quarter Master Sergeant. His brother William was likewise wounded during his service in France and was frequently sent to hospital due to illness. After the war William’s health was never good and he lived his life as an invalid who was loved by his family as a kind and gentle man. Known by the nickname Mick, he changed his surname by deed pole to Edge – his descendants speculate that it was to hide links to the family’s Chinese heritage. His brother Rupert, who kept the family name, had a more mysterious fate: he was never seen again after leaving his family in 1936. His subsequent history is still unknown.