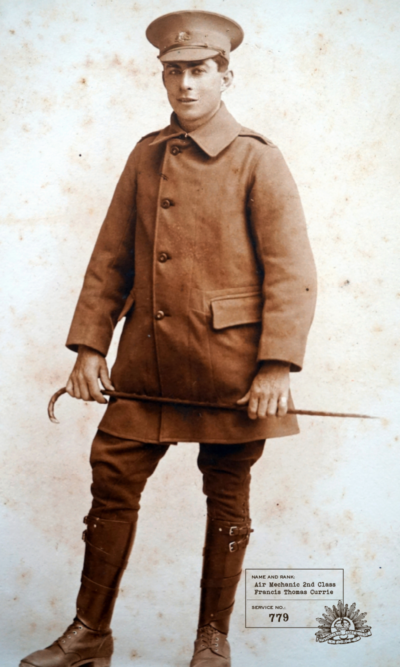 The goldfields Chinese interpreter Lee Hing Jacgung left central Victoria for Gippsland in the 1870s, but that was not the end of the story of his family’s association with the Loddon Mallee region. His daughter Maud Ellen Frances Lee Jacgung married Thomas Ewing Currie in 1889. From c.1909 Currie worked as crown lands bailiff in Bendigo. Their sons Francis and Hugh (born in Oakleigh and Macedon) spent their childhoods in the central Victorian city, and the latter was living with them as a student at the family’s Tyson’s Hill home in the years before the war. Both enlisted. Their Gippsland first cousin Lindsay Lee Jacgung also saw active service in the war – interestingly he had the details of his racial heritage scrawled out in a note on his enlistment form (“European Grandmother / born in China naturalized / g f father born in Victoria / mother British born”). No such inquisition was noted on the forms of his Bendigo cousins with fully European names.
Another cousin who enlisted was Rupert Allan Wilson Jungjohann who was the son of Minnie Louise Lee Jacgung and her German-born husband Frederick Wilson Jungjohann. Rupert seems to have dropped his German surname around the time of the war. Rupert Allen Wilson was assigned to the Field Ambulance in the Camel Corps in the Middle East. He was born and grew up in Melbourne where he seems to have lived most of his life – he is recorded as having passed away in Bendigo in 1962 and is buried in the Bendigo lawn cemetery.

Prior to enlisting in the Australian Imperial Force Frank Currie had had four years military experience serving as a volunteer in the Royal Australian Navy. Currie enlisted as an Able Seaman Driver in the Royal Australian Naval Bridging Train on 1 October 1916. By the 13th October he was transferred to the 2nd Squadron, Royal Australian Flying Corps, with the rank of Private. After training in England Currie graduated and was appointed a flying officer (pilot) and 2nd lieutenant on 19 November 1917 – he was promoted to lieutenant the following year on 19 February. From the beginning of March through to the end of July Frank was serving with his unit in France, followed by another stint from early August through to the start of October. Currie spent the rest of the War on duty in England. Frank also may have been the only commissioned officer in Australia’s armed forces in World War I to have been of Chinese descent. His brother Hugh tragically did not survive the war – he was killed in action in early 1918.

Next: Charles and William Gooey