All areas of the Museum, Classical Chinese Gardens and Kuan Yin Temple are wheelchair accessible. A number of wheelchairs are available in the foyer, please ask at reception.

Guide Dogs and other registered assistance dogs are welcome at the Golden Dragon Museum, in the gallery spaces, garden, temple and to all programs.

Companion and Carer Card holders receive one free entry with the purchase of one admission ticket (to equal value).

The use of flash photography, tripods, is not permitted in all permanent exhibitions and most temporary exhibitions. Hand held photography and filming is permitted. The Museum regularly hosts news and documentary crews from around the world.
Each request for filming and photography is considered on its own merits and if the request is accepted as a strong promotional opportunity for the museum. To discuss a photographic or film shoot for media/news purposes, please contact the Museum on +61 (0)3 5441 5044 or via email.

Our buildings and unique permanent exhibitions make it an ideal location for commercial filming and photography.
While the Museum regularly provides supervised access to a vast array of public spaces and ‘behind the scenes’ locations, our valuable scientific specimens and cultural artefacts are rarely loaned out for commercial filming or photography purposes.
To discuss filming or photography for general commercial purposes, please contact us on +61 (0)3 5441 5044 or via email.

From Monday 2 May, works begin on Stage 1 of the Foyer Upgrade.

Golden Dragon Museum opened in 1991 and across the intervening 30 years, despite many thousands of visitors, has never had a major refurbishment. But this has now all changed.

Last year the Victoria State Government provided $1M for the Museum, in partnership with the City of Grater Bendigo, to undertake a major Upgrade Project.  Targeting specifically those front of house areas mostly used by the public, the kitchen, food preparation area and restaurant have already been completed with food being offered for the first time in over two years over the recent hugely successful Bendigo Easter Festival. Now, however, the works move into the Reception/Ticketing/Retail areas and will be undertaken in two stages.

Collaborating closely with Council and the various contractors who will deliver this exciting project, the works have been scheduled to allow the Museum to remain open with hopefully minimal inconvenience to visitors.  The Project Team has also been very careful to ensure that the Collection, especially those items on display, are protected from dust and anything else that may damage or impact on them in any way.  Upgrades are never easy but working surrounded by fabulous and important artworks adds significantly to the complexity of the project.

Stage 1 (shaded in yellow) will take 6- 8 weeks and will be followed by Stage 2.  Updates will be advised here as they become available. 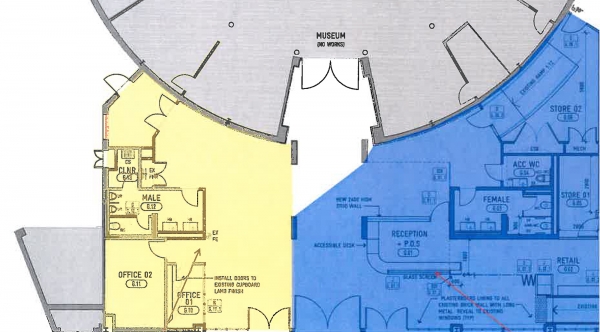